Standish logger nominated as best in the Northeast

Even though Maine is the most forested state in the nation, some people are surprised to find out that not only is logging taking place in southern Maine, it also presents a unique challenge.

The Maine Forest Products Council (MFPC) has nominated Richard Wing & Son Logging of Standish for the Northeastern Region Outstanding Logger Award, given by the Forest Resources Association. The Wings already were honored as MFPC’s Outstanding Logger in 2014 and as the state’s Certified Professional Logger in 2001.

Richard Wing, 64, and his son Tim, 42, practiced sustainable logging before anyone even called it that.

“I’ve always been a conservative in the logging business,” Richard Wing says. “Sometimes people ask, ‘Why is that big tree there?’ I tell them if you leave a mixture of sizes of wood then you can come back in eight or 10 years and take some of them.”

Lynn Wing, Richard’s wife, runs the office with help from Sara, Tim’s wife. The family business produces 3.4 million board feet of saw timber, 18,000 tons of pulpwood and 22,900 tons of biomass (for energy) annually. 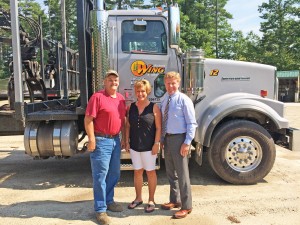 While northern Maine logging is often conducted on a large scale, lots in southern Maine are small, so logging takes place in neighborhoods and close to roads. Many landowners in southern Maine have little knowledge or experience with forest management, so the family helps educate not only landowners, but also their neighbors. The bulk of their work takes place within a 30-minute drive of Standish, which is part of the greater Portland metropolitan area with nearly 40 percent of the state’s population.

“Every time he’s working with a different landowner,” says Howard Charles, a former Sappi forester who’s worked with Richard Wing for decades. “You can’t predict what they want. So he has to listen carefully to their objectives and how they want their operation done. He’s in the public eye all the time and aesthetics are a huge issue for him.”

Tim Wing admits that working in the public eye can “be pretty tricky.” People hear the noise of the machinery and come to ask questions or watch. Dog walkers cut through woodlots.

“People are always checking us out. Most of the people down this way are worried ‘Is it a housing development?’ I’ve been sworn at a few times,” Tim Wing says with a laugh.

Long-time client John Phinney of Gorham, who owns about 4,000 acres, has great confidence in the Wings.

“He and his son Tim do a good, clean job. When they get done there’s minimal slash and waste left over. They utilize the trees well and find good markets for the products,” Phinney said.

The Wings have cut Alan Hawkes’ 800-plus acres since the mid-1980s. “They’re about as honest as they come,” Hawkes says. “They do a great job in the woods. They clean up after themselves. I mean they leave it better than it was.”

The Wings, who live in Gorham, are very active in the community, holding logging demonstrations, donating shavings for the library’s garden and sponsoring the Bonny Eagle High School baseball team.

In addition, they’re currently working with state Sen. Bill Diamond, co-chair of the Legislature’s Transportation Committee, who has put in a bill to make the laws regarding weights for pup trailers consistent with other Maine laws.

“I think they’re wonderful people,” Diamond said. “They’re such solid citizens for one thing, but they also are a shining example of how a family business can and should be run. They’re willing to work seven days a week, as many days as it takes. They’re highly respected and they care about the community.”